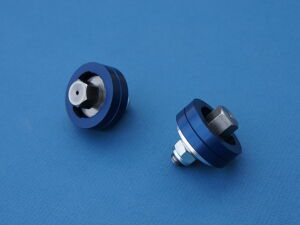 Why you should consider them? The stock Suzuki SV 650 forks use (outdated) damper rod technology to dampen wheel movement. Damper rods inside the fork tubes slow this movement by forcing oil through fixed holes. It’s stone simple, reliable, and has worked for decades; but the fork’s damping cannot be customized to the rider’s weight and riding style. Instead Suzuki picked orifice diameters and oil weight that would work for riders of average weight, and riding style at best.

In contrast, the forks of most modern, high-performance bikes use cartridges that slow wheel movement by deflecting shims based on wheel velocity; far more sophisticated than damper rods.

This is an important distinction, because there are other drop-in fork improvements on the market that slow fork compression by displacing a spring. Only Cogent DDCs are true cartridges; they automatically adjust damping forces based on wheel velocity. We’ve learned what works best for the SV 650 with our computer controlled Damper Dynamometer backed up by true on-bike testing and data acquisition. So, our DDCs come to you ready to drop in, with no further adjustment needed.

Handling is improved, bump chatter, and while under hard breaking.This helps keep the front wheel planted for a more enjoyable and safer ride.

Holeshot/Cogent DDC Cartridge Fork Kit for Suzuki SV-650 (2017+)
All orders plus shipping - Prices subject to change without notice
These are a non-returnable item!